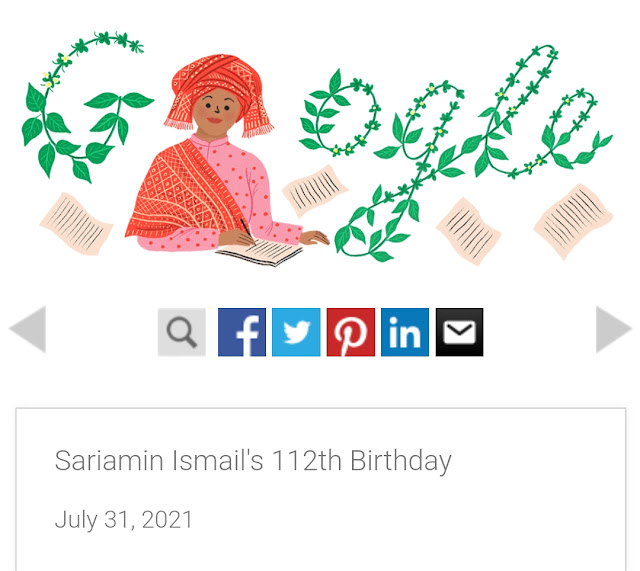 Today’s Doodle, illustrated by Indonesian guest artist Ayang Cempaka, celebrates the 112th birthday of Indonesian author Sariamin Ismail, who is widely considered the primary woman within the nation to publish a completely unique .

On today in 1909, Sariamin Ismail was born in Talu, West Sumatra, Dutch Malay Archipelago (today’s Indonesia). She began to explore the planet of poetry at the age of 10, and by 16, her writings were published in several local newspapers. Ismail became an educator after graduating highschool and worked in various cities across the Indonesian archipelago while continuing to write down over the subsequent decades. Ismail was a lively writer during a time when Indonesian women’s voices were censored and used many pseudonyms to avoid persecution from local authorities.

Based on real-life experiences of romances gone awry, Ismail’s first novel—”Kalau Tak Untung” (If you're Unlucky)—was released under the pseudonym Selaish in 1933, and made history because the first novel authored by a lady in Indonesian history. This daring book exemplified a rejection of widely held Indonesian traditions like arranged marriages, a controversial idea which characterized her work throughout her career.

In 1937, Ismail began publishing stories in “Soeara Kaoem Iboe Soematra,” an area women’s magazine that promoted the values of the relatives in contrast with relationship conventions of the time. She taught into the late 60s and wrote into the mid 90s and left behind numerous anthologies of poetry, novels, and even two children’s stories.

Happy birthday, Sariamin Ismail! many thanks for uplifting a replacement generation of girls to use their voices.