“Father of Judo,” Professor Kanō Jigorō, on his 161st birthday 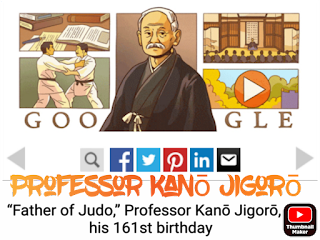 Moment’s Doodle, illustrated by Los Angeles, CA- grounded artist Cynthia Cheng, celebrates Japan’s “ Father of Judo,” Professor Kanō Jigorō, on his 161st birthday. The name Judo means “ the gentle way” and the sport is erected on principles similar as justice, courtesy, safety, and modesty. Kanō saw the martial art as a way to bring people together, indeed while throwing opponents to the mat.

Born in 1860 in Mikage ( now part of Kobe), Kanō moved to Tokyo with his father at age 11. Though he was known as a child sensation in academy, he frequently faced adversity. To make strength, he came determined to study the martial art of Jujutsu. During his time as a pupil at Tokyo University, he eventually plant someone who would educate him — Jujutsu master and former samurai Fukuda Hachinosuke.

Judo was first born during a Jujutsu sparring match when Kanō incorporated a western wrestling move to bring his important larger opponent to the mat. By removing the most dangerous ways used in Jujutsu, he created “ Judo,” a safe and collaborative sport grounded on Kanō’s particular gospel of Seiryoku-Zenyo ( outside effective use of energy) and Jita-Kyoei ( collective substance of tone and others). In 1882, Kanō opened his own dojo (a martial trades spa), the Kodokan Judo Institute in Tokyo, where he'd go on to develop Judo for times. He also ate women into the sport in 1893.

Kanō came the first Asian member of the International Olympic Committee (IOC) in 1909, and in 1960, the IOC approved Judo as an sanctioned Olympic sport.